In 1944, the Gestapo and the militia occupied Miserai and used the chateau as a base to search for weapons parachuted on the "Guard" drop zone, a zone approved by the Air Operations Bureau or BOA. The BOA was created by general de Gaulle to rationalize connections between the internal resistance and the free France in order to deliver weapons, ammunitions and supplies. On June 5, the militia and the Gestapo organized a search of the property. Finding nothing near the chateau, they decided to broaden their investigations and, at gunpoint, forced the owner of the estate, Mr. Judicaël Levesque, to lead them first to the watermill and then to La Poussinière, an abandoned caretaker's house.

Mr Levesque knew his son Jerome who led the resistance in the "maquis de l'Home Chamondot" had hidden weapons in the attic of La Poussinière and somewhere around the mill, he also knew that he would be shot immediately if the Germans found them. Fortunately, Jerome had a hunch and removed the weapons and ammunition from the attic half an hour earlier to hide them somewhere in the nearby woods. To Mr. Levesque's surprise and relief, the weapons were not found. 48 years later, however, in 1992, during the emptying and cleaning of the Brotz lake, several boxes of grenades were discovered in the mud and defused by the demining service.

The 1810 document below shows the mill's daily flour production was four hundredweight per day or about 400 kg. Today, more than 210 years later, the mill no longer produces flour, however, barley remains an essential commodity for successful operations on the site. 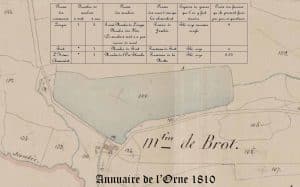